With Keble College, University of Oxford 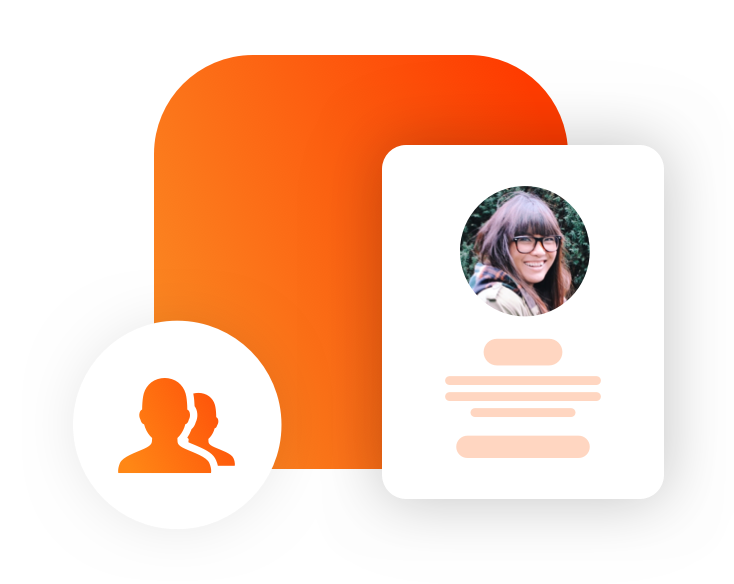 Keble College, University of Oxford, wanted a way to connect and engage digitally with more students from backgrounds that are traditionally under-represented in Higher Education.

This kind of digital channel is particularly important for an Access and Outreach team like Keble's because, unlike a normal Higher Education recruitment team, they do not have a direct line of communication with prospects, and usually rely on schools and teachers to get their message across.

In less than 5 months, Keble have engaged with almost 150 prospective students: 84% from state schools with 53% from non-selective state schools

Outreach is tough, particularly for a grand institution such as the University of Oxford which can often seem too daunting for a prospective student who is a first-generation university applicant or from a group traditionally under-respresented in higher education.

However, for a prospective student, connecting with current students who’ve gone through a similar journey to them, or who are from a similar background, that have made it to Oxford to study can be really reassuring and help with the perception of the insitution being unfamiliar or inaccessible.

Keble College decided to use TAP in order to build meaningful, digital connections with prospective students in target areas of the UK, allowing these prospects to learn more about life as a student at the college and at the university.

Their TAP Feed went live at the end of April 2020.

Our Chat feature allowed for authentic conversations between prospective students and ambassadors. These conversations helped ensure prospects could find answers to their questions and make confident decisions about their future.

Our ‘safeguarding by design’, including automatic keyword detection and conversation flagging, offered a safe space for messages to be exchanged and reflected Keble’s consistent focus on safeguarding.

A passion for WP and outreach

We share Keble's passion for widening participation and outreach. Our team has extensive professional experience in the area offair access to HE. Work in this area reflects our company mission and it aligned with the goals of Keble College.

How Keble promoted the platform

Newsletters are Keble's usual method of communication with their partner (or ‘link’) schools, and the teachers they work closely with already receive them on a regular basis.

Keble accompanied the launch of their TAP feed with a special newsletter which focused on promoting the new opportunity of speaking to their student ambassadors.

In the newsletter they emphasised: 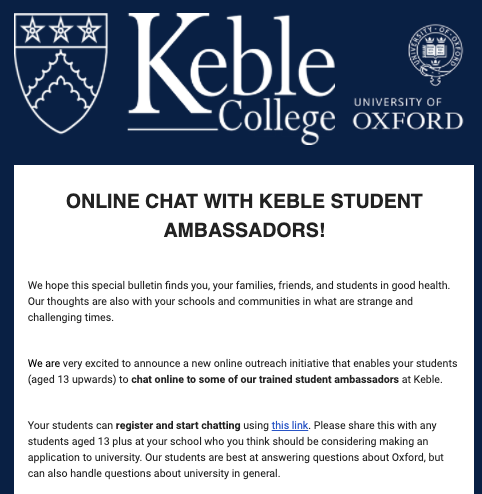 “The platform has been such a success for us. Prospective applicants gain a lot from speaking with current students, and putting them in touch has never been more straightforward.” 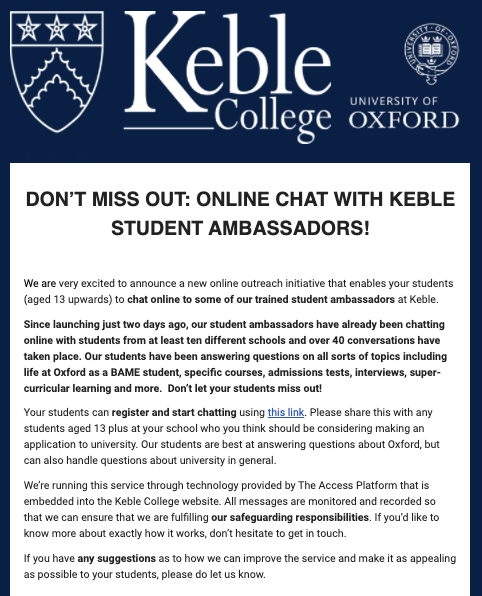 Keble followed this with another promotion, this time as part of their normal, scheduled newsletter.

As well as repeating the use of a clear CTA directing teachers to where their pupils could register and start chatting, Keble also took the step of including early impact data from the launch of their feed.

Demonstrating early success created a compelling and data-led reason for teachers in link schools to promote the opportunity to chat to Keble ambassadors in their institution.

In less than 5 months Keble engaged with almost 150 prospective students, exceeding the internal target they had originally set. 84% of these prospective students were from state schools, 53% of which came from non-selective state schools. 56% of students who engaged with an ambassador on the platform were directly attributed to the newsletters that Kebele sent to their link schools.

Of the prospective students from the UK that Keble have engaged with through the platform, 61% of them fell within Q1-Q3 of the POLAR4 quintiles, with 23% of them falling in Q1-Q2. The majority of these prospective students (51%) were from the West Midlands. This clear regional engagement, which is a discrete target for the college, is indicative of how well Keble has promoted the platform. As well as reaching students in the West Midlands, Keble’s ambassadors have also interacted with prospects from Greater London, the South East, South West, North East, and Wales.

The college has built a strong, diverse team of ambassadors who have exchanged over 2000 messages with prospective students. Their ambassadors have been excellent and demonstrated high levels of professionalism, providing not only informative responses, but also describing their own personal experience of studying at the university. This has led to meaningful and valuable conversations with prospective students, exchanges which have focused on life at Oxford and Keble and the application process.

If you’d like to find out more about how we can help you tell prospects what it's really like to be part of your institution, why not book a demo of The Ambassador Platform?