In the latest in our series of guest blogs reflecting on the new normal for student recruitment professionals, Katharine Wiggell from the Queen's College, Oxford, tells us just what an impact 2020 has had on widening participation and outreach work. 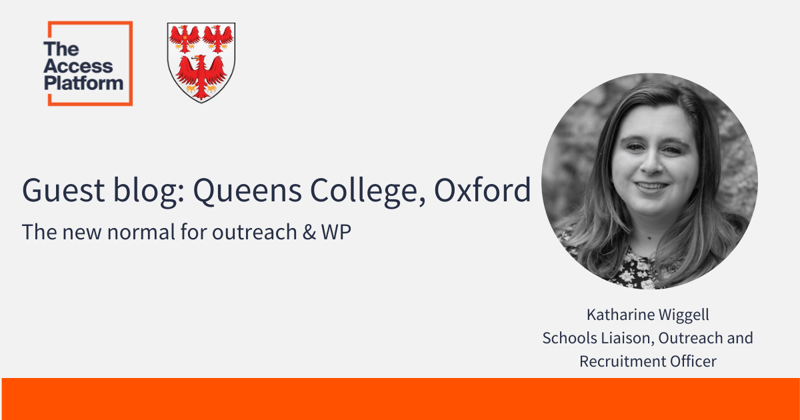 When the UK government announced in March that schools and colleges across the UK would need to close (except for those looking after children of keyworkers and vulnerable children), I cried.

Whilst the decision was made to protect the health and welfare of young people, the teaching staff, and others in school communities, it was obvious to those of us working in the higher education sector how detrimental school closures would be to the education of under-privileged students.

I’m sure there were many young people across the UK who were delighted at the prospect of not having to get up early and drag themselves into school for seven hours a day! However, our concern as a community of Outreach Officers at the University of Oxford lay with those students for whom, without the structure of the school day and the inter-personal relationships formed there with their teachers and peers, would be at risk of falling behind and not fulfilling their academic potential.

Whilst many fee-paying schools were able to adjust to online teaching quite smoothly, some state schools really struggled to make the transition.

Speaking with teachers at our link schools, there were numerous hurdles they had to overcome. Students were struggling with the change and not turning up to online classes – was this just down to students feeling a bit lazy? Or an indication of a deeper issue – not having a safe space at home to so school-work? Difficulties with their own mental health and well-being? Illness or bereavement within the family? Not having access to a laptop or a reliable internet connection?

Online school really opened up our eyes to the digital divide that exists within our education system and the extent to which socio-economic differences can affect a child’s academic experience and attainment.

It was understandable that, in the early days of the first lockdown, schools had to prioritise adjusting to online learning and engaging with universities took a back seat for the first month or so.

We used this time to build up a bank of super-curricular resources to recommend to students, including podcasts, websites and videos, and made plans to reschedule as many in-person events as possible or to put them online. We communicated with our link schools during this time to let them know that we were happy to provide support and online sessions whenever they wanted them.

The Colleges and Departments at Oxford collaborated on Virtual Open Days in the summer, making video tours and running Q&As with Student Ambassadors and Tutors. We definitely saw online engagement with the University go up considerably during the summer term, compared to when lockdown first began, which was fantastic.

It was great to see students taking the initiative and getting in touch, with more prospective applicants asking our Student Ambassadors questions on TAP than ever before. There was a lot more interest from teachers as they took us up on offers of sessions on Zoom for their Oxbridge hopefuls as well. I’ve found that the new school year has been particularly busy for me as a result!

The University offered a series of Remote Interview Workshops to support applicants from UK state schools, which were really well attended and great to be involved with.

With my counterparts from Cambridge, who work at Fitzwilliam College and Gonville and Caius College, we provided similar sessions for state school applicants from our link areas of Cumbria and Lewisham respectively, giving those students all the key information about their upcoming interviews and how to best prepare. These are definitely initiatives that I hope we will be able to carry forward in a digital format in the future, as it’s a great way to reach a large audience of students, particularly in more rural regions like Cumbria where it can be tricky to get students from different schools together in an easily-accessible location.

I do miss travelling to our link schools and meeting the students face to face though. (Well, I maybe don’t miss having to eat the slightly questionable sandwiches on the CrossCountry trains, when I’ve forgotten to bring a packed lunch for a six hour train journey, but you can’t have it all…)

Unfortunately, it’s looking like visits to schools – and inviting students to visit us here in Oxford – won’t be a part of the ‘new normal’ just yet.

Whilst adapting to online Outreach has been an interesting challenge (and one I think we are all now getting to grips with, some nine months in!) I don’t think anything can beat speaking to students in person and hearing their questions, their worries, and their excitement first-hand.

I’m hopeful that we’ll be able to return to offering in person events at some point in 2021, and that we will be able to find a perfect balance of in-person and digital initiatives for the near future. That way, we will be able to help academically-capable students from under-represented backgrounds to feel confident when making their university applications, allowing them to recognise that they have the academic ability we seek, and - regardless of what their background is – that they are deserving of a place at Oxford.

Katharine Wiggell is the Schools Liaison, Outreach and Recruitment Officer at The Queen’s College, one of the constituent Colleges that make up the University of Oxford. She works with students from backgrounds that are not significantly represented within the University, providing them with accurate information about life at Oxford and other highly selective universities. She also supports students who are in the process of making applications to Oxbridge.